I had the great opportunity of meeting Rupert Everett as he came to dine in the restaurant in which I work at the weekend. As I got to know the cast and crew a wee bit and I had a feeling that this wouldn’t be the last time I saw them. As it happened Mr Everett came in everyday that week after matinee and dinner performances and I caught up with him again on the Friday. He was over from London to do a week-long play called “The Judas Kiss”. Before I knew, the conversation led to my studying photography at Griffith College. After I mentioned that I was in the middle of a portraits and visual-diary project Mr. Everett invited me down to the Gaiety Theatre to take his portrait immediately after the matinee curtains fell. Initially he said that I would have fifteen minutes to shoot him on stage. Deep breath.

I had no idea what to expect  after striking up a conversation with the lighting crew in the Greenroom. The lads kindly joined me on stage as I asked for a little more light here and there. To which they called out a confusing yet impressive blend of letters and numbers, referring to an invisible person in the ceiling rig. I instantly had the light I needed. As it turned out I had only six minutes and thirty seconds to take a grand total of just twelve images. This very quickly whittled down to two when I got home to the laptop.

The final scene in “The Judas Kiss” is a dark and lonely Oscar Wilde monologue, and as such there had to be negative space engulfing him for the image to work.

The closer, more intimate shot of Rupert was taken with my Argos-bought Canon 50mm prime lens, very quick and extremely sharp lens and a must for every camera bag. I’d like to thank Rupert for giving me the chance to take his picture even as the costume ladies were dying to get his outfit removed from his shoulders and back in storage. This was a remarkable experience and its inclusion in my college project scored me an ‘A’ for the effort.

As requested here is the Exif Data for the last shot. 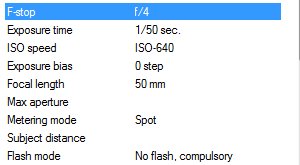